The pituitary is one of the most important and complex endocrine glands. It is the headquarters of endocrine system. As a major member of the neuro-endocrine system, it plays a key role in maintaining the homeostasis of the body's environment. The pituitary is located in the sella at the bottom of the brain, weighs less than 1 gram, and is consist of two parts: the adenohypophysis and the neurohypophysis. The adenohypophysis is mainly composed of five hormone producing cells, including corticotropes, somatotropes, lactotropes, thyrotropes, and gonadotropes. These cells form a complex signal system with downstream target endocrine glands, which play an important role in physiological processes such as growth and development, metabolic regulation, reproduction, and stress. The development of the pituitary gland is a delicate process. Around the third gestational week of the human embryo, the five hormone producing cell types develop in a stereotypical order from Rathke’s pouch, an epithelial invagination of the oral ectoderm. In the past 30 years, mouse genetic research has identified many signaling pathways (such as BMP, FGF, WNT, and SHH) and transcription factors (such as LHX3/4, PITX1/2, PAX6, HESX1, SOX2, PROP1, POU1F1 ( PIT-1), GATA2, TBX19 (TPIT) and NR5A1 (SF-1)) are involved in pituitary development1-4. However, we don’t know much about the various cell states and dynamic changes experienced during the development of the pituitary gland; we even lack accurate knowledge of the gene expression profiles of these hormone producing cell types or subtypes. As bulk RNA-seq sequences tens of thousands cells, each sample is actually an "average cell" of various hormone producing cell types. 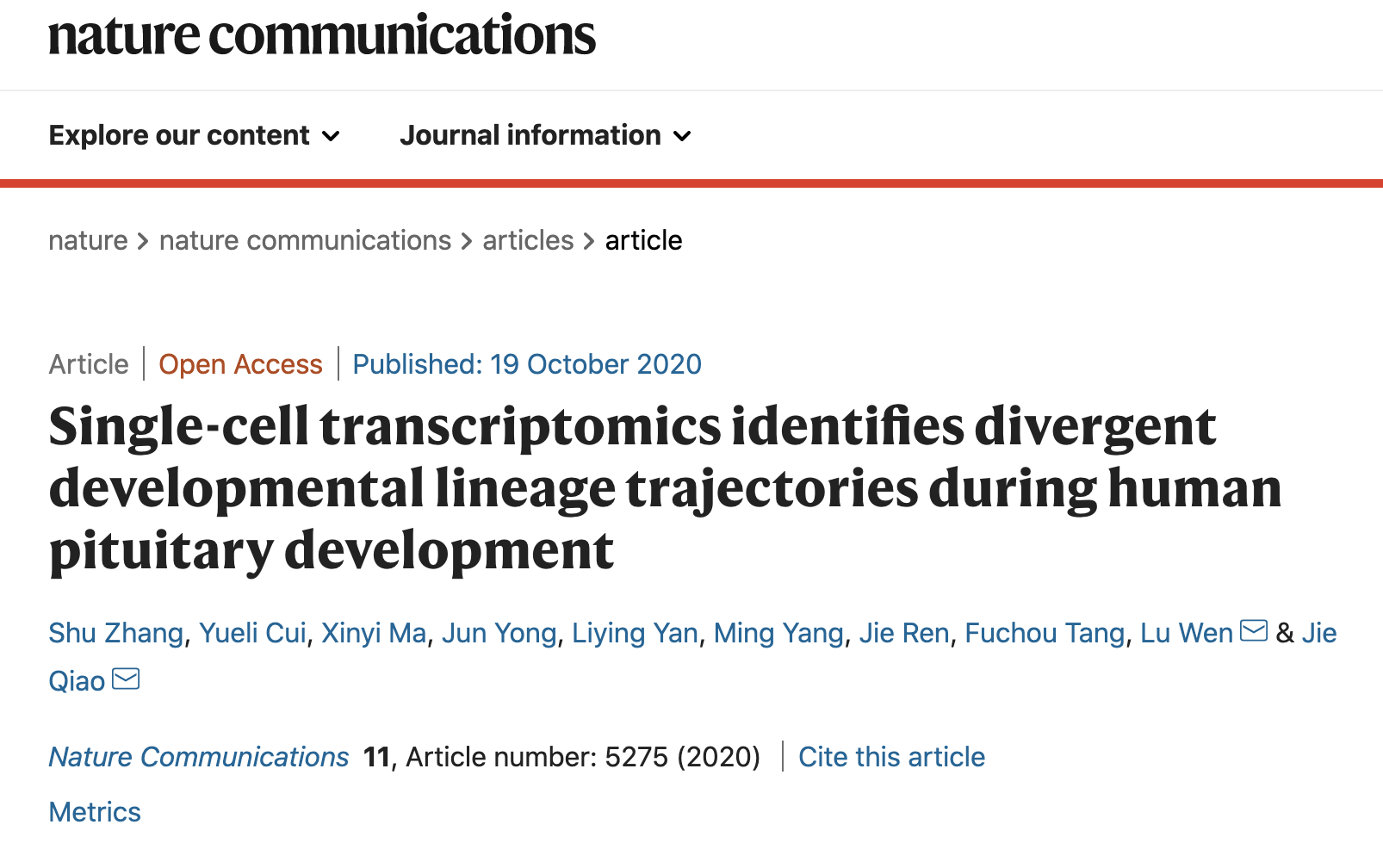 Firstly, the researchers identified the subpopulations of human pituitary stem cells whose molecular characteristics have not been clearly studied, and found that the stem cell subpopulations changed during development time. Early stem cells have a strong proliferation ability and highly expressed ASCL1, a transcription factor necessary for the differentiation of all hormone producing cells in the pituitary. This gene may play an important role in the differentiation of early stem cells. The proliferation ability of stem cells in late stages was inhibited, and the WNT signal regulators SFRP2 and WNT5A were highly expressed. In addition, compared with differentiated hormone producing cells, pituitary stem cells simultaneously highly expressed epithelial marker genes CDH1 and mesenchymal marker genes VIM and CDH2, which indicated that they were in a hybrid epithelial and mesenchymal (E/M) state. The stemness state is positively correlated with hybrid E/M state, and previous studies have shown that this hybrid E/M state also played an important role in mouse organogenesis and tumor metastasis5.

Subsequently, using pseudotime analysis methods RNA velocity and Slingshot, the researchers constructed the lineage trajectory and differentiation direction of five hormone producing cells, and identified lineage shared or lineage-specific down- or up-regulated transcription factors, some of which were already up-regulated in the intermediate state, which may play a key role in the regulation of cell fate commitment. 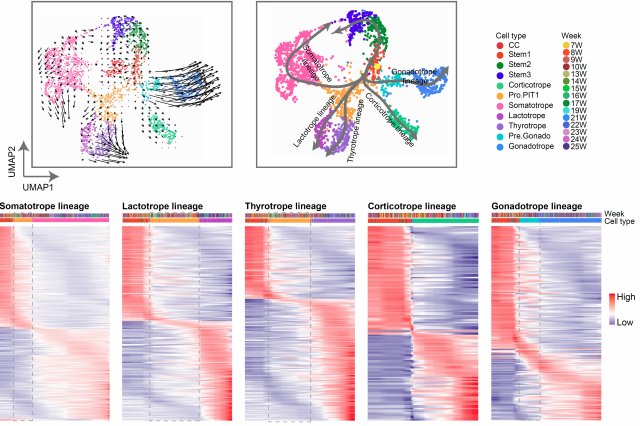 Then, the researchers conducted specific analysis of each cell lineage. It was found that corticotropes gradually matured from the early intermediate state with a small number of proliferating cells and then established the cortisol feedback pathway. The PIT-1 lineage includes three types of endocrine cells: somatotropes, lactotropes and thyrotropes. Pseudo-time analysis identified their common progenitor cell Pro.PIT1_all, GATA2-positive thyrotropes precursor Pre.Thy and the potential somatotropes precursor Pre.Som. The expression of critical transcription factors specific to each sub-lineage of PIT-1, NEUROD4, ZBTB20, and ASCL1 are all up-regulated in Pro.PIT1_all compared to stem cells, and progenitor cells further differentiated into NEUROD4high/ZBTB20mid/ASCL1low somatotrope precursors and mature cells, NEUROD4mid/ZBTB20high/ASCL1low lactotropess and NEUROD4low/ZBTB20mid /ASCL1high thyrotrope precursors and mature cells, which indicated that progenitor cells had a co-activation program before cell fate is committed. Combined with the mouse double knock-out model, it is speculated that there is competition among the three programs in the progenitor cells with the lactotrope lineage being produced in a situation of high ZBTB20 expression6. Gonadotropes showed two developmental trajectories with different initiation times. Among them, the lineage expressing primate-specific CGB started in the early stage, which may be involved in the development of HPG axis. But there is no cell subtype expressing CGB in the mouse model. The subtype highly expressed follicle stimulating hormone (FSH) initiated in the late stage. 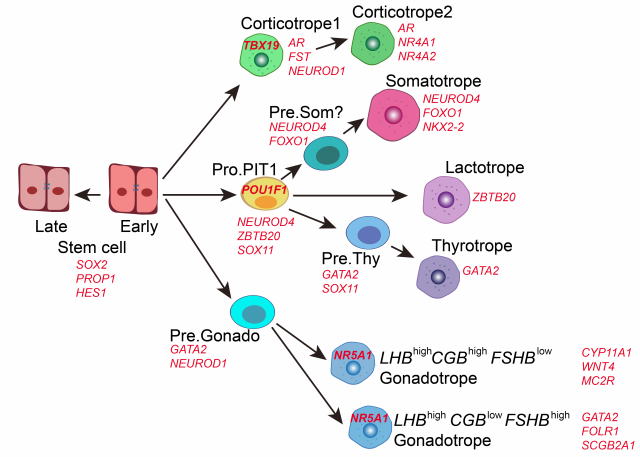 In summary, this study has drawn the first single-cell transcriptomic map of human pituitary development, which is helpful to find new pathogenic genes for congenital pituitary diseases, and also useful for exploring stem cell treatments for hypopituitary hypofunction.